Since the Federal Reserve reversed course and said they will start to taper their $120 billion a month QE program we have seen rates begin to move higher. Obviously, higher rates have hurt technology stocks and their valuations recently. So now that the sharp correction/pullback in stocks has subsided, many talking heads in the financial media think that the Federal Reserve will be on hold as far as interest rate increases go. Many of these talking heads have stated that the market has already done a lot of the central bank’s heavy lifting for them. This means that yields have already moved up and the Fed will not have to do much going forward.

The Federal Reserve has put themselves in a box. All of the past QE and balance sheet expansion has created the highest inflation in nearly 40 years. After years of a deflationary environment the Fed’s 2.0% inflation target has been exceeded and now the central bank has to try and correct the overshoot. They really do not have a choice but to raise rates at least 3 times this year. Even then, they are still likely behind the curve as the market is penciling in at least 4 rate increases in the fed funds rate.

Many traders and investors like myself follow the 2-year note very closely and often say that this is where the fed funds needs to be. Currently, the 2-year U.S. Treasury note yield is around 1.185%. This tells us that they are way behind the curve already and really need to start playing catch-up. At this time, the fed funds rate is 0-0.25%. According to this, the Fed will need to raise rates 4 to 5 times in order to get in line with the 2-year note.

The market rallies since March 2009 have been built on massive liquidity provided by the central bank. In fact, the last time the Fed started raising rates was in 2018. In December 2018, the Federal Reserve bank stopped raising interest rates and started cutting them to zero and began a massive QE program because the market staged a sharp 20% correction. Now, that current QE program is being tapered and will end in March. The Fed is also likely to increase the fed funds rate by a ¼ point. This is a big change from the 0-0.25% fed funds rate and the $120 billion a month of buying U.S. Treasuries and mortgage backed securities(MBS).

Today, stocks are in rally mode right now after a sharp decline into late January 2020. This rally comes after a sharp oversold condition in the major stock indexes. This is normal and actually expected price action. The real test for stocks will come when yields begin to move higher again. The current pattern on the 10-Year U.S Treasury note suggests a move to 2.01% very soon. There is even a good chance that the yield in the 10-year note might even test 2.30%. Either way, yields look to be headed higher regardless if stocks rally or not in the near term. 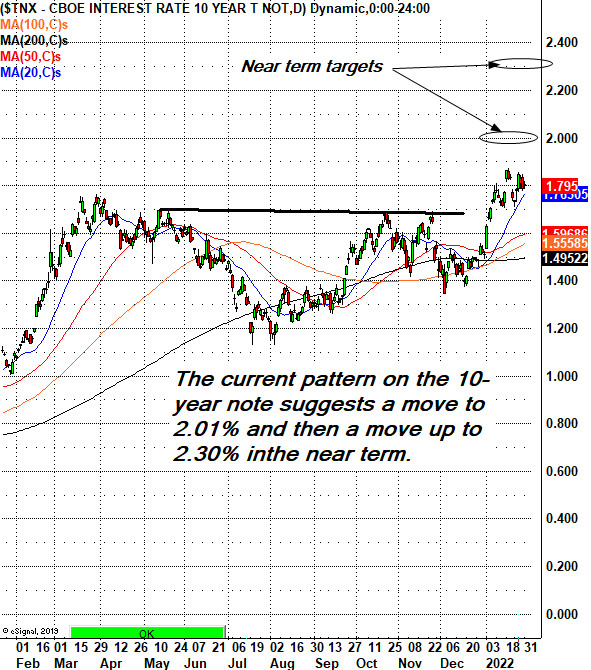