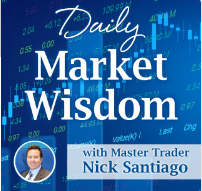 1. This morning, the major stock indexes are starting out with a strong upside rally. In fact, when the futures opened up on Sunday night they were strong. The financial media is telling us that the pullback in the 10-year U.S. Treasury Note yield is the catalyst for the rally. This might be true today, but then does it mean that the market will rollover when yields start to move higher again? After all, yields got stretched and overbought last week, but after a pullback the pattern suggests yields are going a lot higher. So take everything in stride, don’t get too excited one way or the other. Take things in stride, let the charts play out and don’t get too excited on the up swing or the down. Things take time. Ebb and flow.

2. Nick doesn’t see 10 year dropping much now and sees them heading higher. There’s a lot more upside. Nick’s been in and out of that trade for a long time. Nick said last March that yields have bottomed when they hit .39. Now we hit 1.6. Ultimately, they’re going higher.

3. As Nick has been promising, gold hit low $1700’s meaning a tradable bottom is in place. We’ll be getting regular updates Gold/Silver small uptick in gold, GLD up and futures as well. GDX up a bit. Silver up as well. Nick is invested in the gold miners and paper gold. The big decline is in so the risk is lower. There’s always risk, but the odds are favorable now.